Devastated fans explain what happened when their favourite show left the West End for good.

“I’m missing a huge part of my life. I used to have somewhere to go to, knowing it would make me happy and feel good, I don’t anymore,” said Jessica Gray, 26.

Whether you’re a musical or play lover, London’s West End offers a wide range of shows: from the emotional Les Misèrables, to a juke box musical like Jersey Boys and Agatha Christie’s Mousetrap, the longest running show in London, there’s something to satisfy everyone’s tastes.

Every show accumulates a fan base with the musical becoming part of their life, developing friendships with supporters as well as cast members, following the show to other events and creating social media fan accounts becomes a normality.  So, what happens when a show closes?

Sunny Afternoon has grazed the West End for the two rock ‘n’ roll filled years. Not only has it accumulated a huge fan base, it has also won four Olivier Awards and has been praised by many stars, Mark Hamill being one of them.

In August 2016, the hit show on the rise and stardom of iconic English band The Kinks embarked on their first UK Tour, with the West End cast doing their last performance on October 29th 2016.

Deborah,28, undoubtedly set the record for seeing the most shows within the Sunny Afternoon fan base, hitting the mark at 279 times.

How involved were you with Sunny Afternoon?

Deborah Gilpin: I ended up seeing 279 shows, although I’d have liked to reach the 300 mark.

Throughout her visits, Debbie quickly became friends with other regular audience members, together they started a Twitter fan account. “We just wanted to bring people together initially, then this year we’ve tried our best to promote the second cast as they seemed to be getting less attention, which led to the Cast Member & Understudy of the Month awards,” said Debbie.

How are you coping with the show leaving the West End?

I had no idea how to cope with it at the beginning, my plan was to make the most of it being there, enjoying every minute of it and waiting to see how everything went afterwards. Luckily I have my theatre reviewing keeping me busy. I’m waiting for more of the actors (from both casts) to get new jobs or announce gigs, I’m going to follow them on their new projects. Plus I’m excited to see what the tour is like, I’m planning to see it once it reaches a venue closer to me.

Ksenia,30,  travelled to London from Russia a lot, seeing the show 122 times: “Being a Kinks fan, I’d been following the development of the show since its first workshop in December 2012.”

“I fell in love with Sunny Afternoon and there was no turning back. I’m also co-running the fan page with Debbie and Jess”.

How you’re feeling now and how you’re trying to cope with its ending, do you have a special plan for that?

Ksenia Nemchinova: I’ve never been this attached to a show before so it’s not easy to process and to cope. Sunny Afternoon may not be in London anymore, but I’ve seen the touring production several times and I have grown to love them dearly, so it’s definitely not the end for me, the tour will keep me going for another few months.

And after that, who knows? The show may be back in London again, maybe if we all wish really hard…

Jessica has been following the show since its very beginning: “I first saw Sunny Afternoon at the beginning of October 2014.

“I had been invited to review the show for my blog, and became a fan immediately.”

“I started a fan page first on Twitter and then on Facebook and eventually I made arrangements with the show’s marketing company for an official Sunny Afternoon Challenge Week to happen.”

“During it, we would attend every show over a week and blog about it daily, with a new challenge being assigned to us every day.”

What are your plans now?

Jessica Gray: I’m actually leaving London – not exactly because of the show closing, but I’d be lying if I said that it didn’t make my decision a lot easier. I’d like to see the tour again, however following it around the country isn’t an option for me. I’d mostly like to see what actors from the West End production do in the future in terms of new shows.

The world doesn’t end when a show ends. There are different ways to cope with it, whether that is concentrating on other shows, supporting the cast members in new projects or trying to stay away. Even when the show has ended, you’ll always have the memories. Not to forget the cast recording.

Katie and Richard are two romantics that meet at a rather unromantic setting. Both are on a night out in a sweaty club and their drunken friends are trying to hook them up. The next morning they wake up hungover, barely remembering that they had slept together.

As soon as Katie gets the chance, she jumps out of bed and disappears. Richard is not her type, plus, she still needs to get over her Ex. However, as much as Katie would like to never see Richard again, fate has a different plan for them. Due to their friends, they keep bumping into each other, but does this mean they are meant to be?

Writers Richard Marsh and Katie Bonna create a wonderful love story that has the theatre shaking with laughter. Through its pop culture references and and modern feel, it’s relateable to any millennial everywhere. Some of us might see themselves in various characters, and recognise situations that mirror their own lives.

Pia Furtado directs Ayesha Antoine and Felix Scott who commit to their characters wonderfully and have the ability to change personas instantaneously, while they rhyme their way into the audiences’ heart.

Michael is the frontman of a band called Lost Boy. He and his friends are an inch away from becoming a success. Then his mother suddenly dies from a hit and run accident and he never speaks a word again. His friends desert him and he lives with his uncle. Years later, his ex-girlfriend Lauren and his friend Jake who is now Lauren’s boyfriend, want to make things good again. When the band gets another shot at stardom, Jake tries to get Michael back in the band, because the label wants him to be the frontman once again. When Lauren tries to bring Michael back to normal, old feelings are re-emerging and a dark truth uncovered.

Jamie Jackson’s direction of the musical is fresh, artistic and contemporary, which works well with the venue, the story and the songs.

The teenage version of Michael, played by Ed Campbell Bird, appears as the inner voice of him, while he stays muted the teenage Michael sings and expresses his inner feelings. During flashbacks with the mother that explains their relationship, which was sometimes difficult, due to his mothers drinking and disappointment of his father leaving them. His uncle Will had to deal with the loss of the sister but couldn’t mourn her loss having cared for his nephew at a young age. Now he is torn between living his own life and staying with his nephew.

Michael played by David Leopold has the ability to show Michael’s pain and sorrow of losing his mother. His life being turned upside down, the confusion of not knowing who the driver was and his friends suddenly abandoning him weighs on him heavily. His facial expressions and body language convey his feeling’s perfectly, making you instantly connect with Michael. He is a lost boy, which coincides with the name of his former band.

Tori Allen-Martin is not only an incredible musician and writer, she plays her part as the ex-girlfriend that was driven away by her guilt and, feeling helpless but unearths old feelings for Michael. Her voice also touches everyone in the audience. It is soft, yet strong, beautiful and emotional.

Muted runs at the Bunker Theatre until 7 January 2017.

★★★☆☆ Park Theatre, This Little Life of Mine

Michael Yale (Book and Direction) creates a delightful production that depicts the ups and downs of an ordinary life.

Jonesy and Izzy are young, in love and just moved into a new tiny flat in London. They live an ordinary life, with friends and jobs. However, as normal for ordinary people, things happen. Rather their funny incidents, with their friends wanting to swing with them or showing them what Tinder is about. As well as sad moments, like having difficulties to get pregnant which puts a strain on the relationship. From the beginning of the show it is clear that this new musical has a lot of potential. With songs like ‘Hey Prince Charming’ and ‘Just one more’ ( A song about one cheeky drink at the pub turning into many), which we’ve all experienced before. 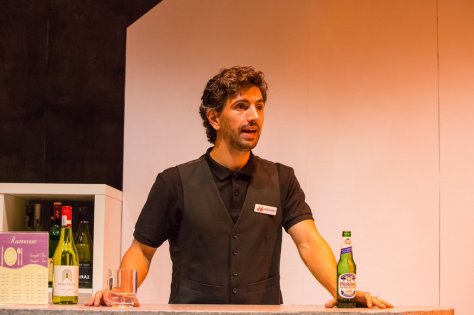 Greg Barnett is the comedic highlight, playing Raphael the barrista and bartender.  Kate Batter has a wonderful voice and shows vulnerability playing Izzy , who’s desperate to become pregnant. Caroline Deverill shows great versatility playing a range of characters, from the best friend to the mother-in-law. Jonesy, played by James Robinson, shows a lot of heart. The duet between him and Izzy, is incredibly touching and is a perfect way to show their problems as a couple, their loss of connection and disparity. 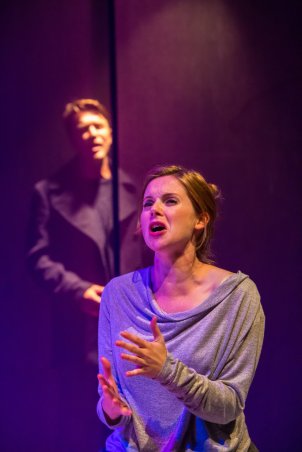 Some of the characters are flawed and are missing substance. While only showing the surface, it still feels believable and their feelings and problems are easily relatable. As a millennial, I expected this show to mirror a contemporary couple’s lifestyle. However, it wasn’t modern enough for me. It was great to see references to Doctor Who or seeing them take a selfie and things that millennials do and say, but it was simply not enough. Sometimes, it wasn’t really believable either. Izzy wasn’t dressed as hip and young Londoner and not knowing what Tinder was, even if you’re in a relationship, doesn’t particularly scream millennial.

Yet, this heartfelt story is wonderfully entertaining and Charlie Round-Turner’s music makes this ordinary musical quite extraordinary.

The Little Life of Mine is currently playing at the Park Theatre until 29 Oct 2016.